One of the most important aspects of the Santa Fe Chamber Music Festival’s mission is to provide educational opportunities to local students year-round. Programs such as Music in Our Schools, Strings in Our Schools, Guitars in Our Schools, and Youth Concerts provide immersive, hands-on experiences to a range of students from pre-K through grade six and expose them to music from the classical repertoire and beyond.

Although the Festival launched its educational initiatives decades ago, those initiatives have evolved under the leadership of Artistic Director Marc Neikrug, who joined the Festival in 1998. “I’ve always had a sense, at least in the time that I’ve been here, that our social system lacks any modicum of music or cultural education,” Neikrug said, “so I went about developing an educational program in the schools that’s our own invention.” 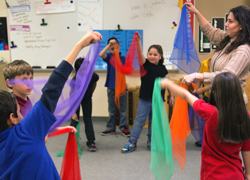 During the school year, Music in Our Schools, the largest of the Festival’s educational programs, presents three live, interactive, and fun-filled chamber music concerts featuring classical, jazz, world music, and more to students attending public schools in Santa Fe and Pecos as well as the Kha’p’o Community School in Santa Clara Pueblo. The program “consists of the typical performances that many groups do in schools,” Neikrug said, “but we combine that with actual curriculum. We write lessons, we prepare materials, we send the materials to the schools weeks before we play, we train the teachers in the schools how to use the materials with the kids, and we are systematically building a five-year curriculum that can be replicated, exported, and reproduced.”

Although the program, which launched in 1997, is expected to reach more than 5,000 students this season, Neikrug hopes that it can expand its scope even further. “I think the program we developed is exemplary, and I would like to do more,” he said. “I would like to see it in every school. I would like to see it offer 10 concerts a year instead of three or four, but at least we’re making real inroads into the community. My feeling,” he added, “is that an organization exactly this size with a concert season that is finite has the responsibility to be a beacon in the community and do as much as it possibly can to educate and expose kids to bring music to all of them.”

In the 2017–18 season, Music in Our Schools will present concerts in 12 schools that center on three themes: the Guitar Duo (in September and October), the String Quintet (in November), and the Jazz Quartet (in March).

Through Strings in Our Schools, which began in 1995, students in four local elementary schools that don’t otherwise offer string-based music instruction enjoy free weekly, hour-long violin lessons at the beginner- and intermediate-levels. The classes comprise small groups of students and are taught during school hours (and at Tesuque Elementary School after hours) by longtime Festival collaborator Hilary Schacht. Students use instruments the Festival loans to them and, at the end of the year they perform in group concerts at their own school and district-wide . This season, 74 students will participate in Strings in Our Schools.

Guitars in Our Schools

The Festival’s newest program, Guitars in Our Schools, launched in 2016 and is based exclusively at the Kha’p’o Community School in the Santa Clara Pueblo. Led by Roberto Capocchi, the program is a hands-on after-school enrichment initiative that allows students to learn various aspects of guitar-playing through one beginner- and one intermediate-level group class each week. 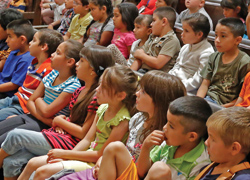 A mainstay of the Festival since 1983, the Festival’s four annual Youth Concerts are enduringly popular events that make classical music fun and accessible to children of all ages.

Held during the Festival’s official summer season in St. Francis Auditorium at the New Mexico Museum of Art, the concerts feature excerpts from that season’s repertoire, performed in highly engaging ways by that season’s musicians. In 2018 the concerts — which are estimated to reach around 1,000 students — will be held on July 16, July 23, July 30, and August 6.