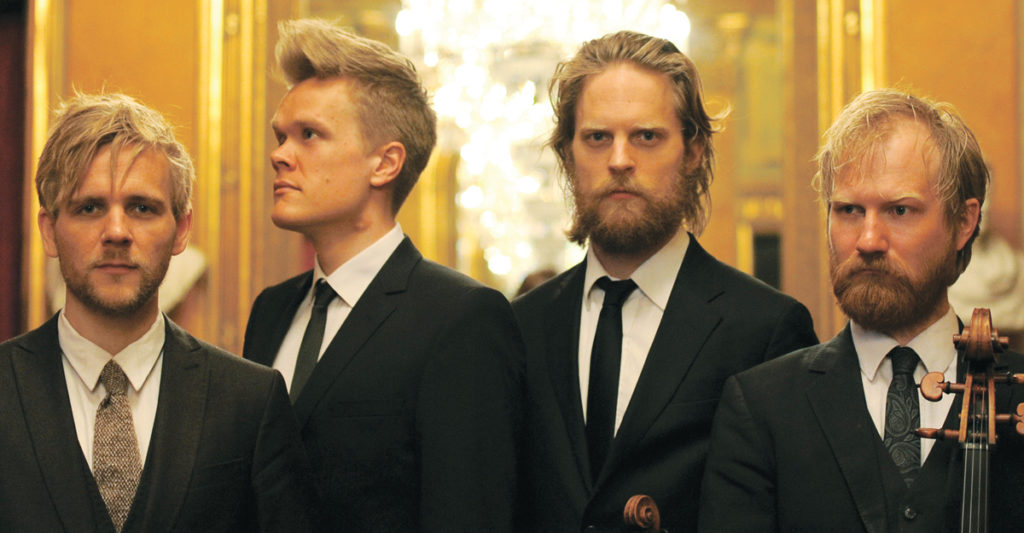 The young Danish String Quartet makes its Santa Fe Chamber Music Festival debut on Tuesday, Aug. 7 and the very first composition it performs is by a fellow Dane – Hans Abrahamsen.

“What is a prelude? And can you have a prelude to other preludes?” Sørensen asked rhetorically. “The 10 preludes are telling their own little stories, depicting a range of emotions, that, when experienced together, make a tremendous impact.”

Abrahamsen, he said, began composing in the 1970s “and quickly established himself as one of the most influential composers in Scandinavia, writing pieces for many of the biggest orchestras and artists.”

“10 Preludes for String Quartet” is from that early period, 1973 to be exact.

After achieving some success, he stopped composing for several decades, Sørensen said.

Abrahamsen returned to arrange and write music in the beginning of the 2000s.

‘Now,” Sørensen wrote, “he is back in the top of European composers and receives (many) prizes and awards.”

The DSQ initially encountered Abrahamsen’s music in a chamber music competition in 2004. The ensemble picked “10 Preludes” as one of the obligatory Danish pieces to play in the composition.

“We fell in love with the simple and very original structure of the piece and have been playing it for many years,” Sørensen wrote.

The quartet programmed Nordic folk music on two other CDs. “…We made these two albums mainly because we love the traditional Nordic music and felt like we could color the melodies in ways that were not explored before,” Sørensen wrote in the email.

The ensemble is happy to contribute to widening the audience for these folk tunes, he added.

“Beethoven is Beethoven – majestic, powerful, divine. We have been playing Op. 132 for many years and still don’t grow tired of it,” Sorensen said.

The program for those concerts is W.A. Mozart’s Clarinet Quintet in A major and Ernest Chausson’s Concerto in D major for Violin, Piano and String Quartet.

These concerts are the first time the DSQ will have played the Chausson. In October, the ensemble will again present its own annual DSQ Festival in Copenhagen.

That festival’s goal, Sørensen said, is to “create an event with a combination of the highest musical quality and a relaxed and cosy atmosphere. We want to invite the audience into our own living room. “That is why we are doing everything ourselves – curating, playing, inviting artists, decorating the room, building a bar etc.,” he added.

Besides Sørensen, the other DSQ members are violinist Frederick Oland, violist Asbjørn Nørgaard and cellist Fredrik Sjolin.
—
For Festival tickets, visit santafechambermusic.com or call 982-1890 or 800-221-9836 ext. 102