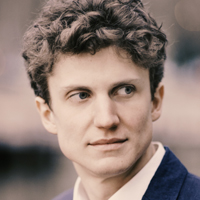 Zoltán Fejérvári has emerged as one of the most intriguing pianists among a new generation of Hungarian musicians. He won first prize at the 2017 Concours musical international de Montréal and is a recipient of a 2016 Borletti-Buitoni Trust Fellowship. He’s given recitals throughout Europe and the Americas at venues such as Carnegie Hall in New York City and the Place des Arts in Montreal, Gasteig in Munich, Auditorium del Lingotto in Turin, Biblioteca Nacional in Buenos Aires, Palau de la Música de València, and Liszt Academy in Budapest. As a soloist, he’s performed with the Budapest and Verbier Festival Orchestras, Hungarian National Philharmonic Orchestra, and Concerto Budapest Symphonic Orchestra, among others, and he’s collaborated with such conductors as Iván Fischer, Gábor Takács-Nagy, Ken-Ichiro Kobayashi, and Zoltán Kocsis.

In the 2019–20 season, Mr. Fejérvári performed recital, chamber music, and orchestral repertoire that spanned five centuries. In August 2019, he made his Santa Fe Chamber Music Festival debut with a solo recital that featured works by Bartók, Jörg Widmann, and Schumann followed by three chamber music concerts. He also made recital debuts with the Washington Performing Arts organization in Washington, DC; the Howland Chamber Music Circle in Beacon, New York; The Frederic Chopin Society in St. Paul, Minnesota; the Sanford-Hill Piano Series at Western Washington University in Bellingham, Washington; and Norwich Chamber Music in Norwich, England. As a chamber musician, he also performed in Liverpool, England, with the Elias String Quartet, presented by the Royal Liverpool Philharmonic, and at the Brooklyn Chamber Music Festival.

Highlights of Mr. Fejérvári’s previous seasons include appearances in Kalamazoo, Michigan, as part of the Gilmore Keyboard Festival’s Rising Stars Series; at the Montreal Symphony Orchestra’s Classical Spree festival; with the Vancouver Recital Society in British Columbia; and at the Lucerne Festival at the request of Sir András Schiff, a longtime mentor to Mr. Fejérvári. For the 2017–18 season, Sir András selected Mr. Fejérvári to participate in his Building Bridges concert series, which he established to highlight young pianists of unusual promise. Under this aegis, Mr. Fejérvári gave recitals in Berlin, Brussels, Zurich, Bochum, and Ittingen, among other cities. Additional recent highlights include performances at the Liszt Academy in Budapest and with the Budapest Festival Orchestra, led by Iván Fischer, both in Budapest and on tour in Warsaw.

Mr. Fejérvári is a frequent performer of chamber music. He’s collaborated with the Keller and Kodály Quartets and with violinists Joseph Lin and András Keller; cellists Gary Hoffman, Christoph Richter, Ivan Monighetti, Frans Helmerson, and Steven Isserlis; and horn player Radovan Vlatković. He’s appeared on the Kronberg Academy’s Chamber Music Connects the World program; as part of IMS Prussia Cove’s Open Chamber Music Seminar; at Lisztomanias in Châteauroux, France; at the Tiszadob Piano Festival in Hungary; and at Encuentro de Música in Santander, Spain. At the invitation of Artistic Director Mitsuko Uchida, Mr. Fejérvári participated in the Marlboro Music Festival during the summers of 2014, 2015, and 2016. He also toured throughout the United States with Musicians from Marlboro in the 2017–18 and 2018–19 seasons.

In January 2019, Mr. Fejérvári released his debut solo recording, Janáček, on the Piano Classics label, and Gramophone magazine called it “the most sensitive and deeply probative recording” of the Czech composer’s work. In 2013, his recording of Liszt’s Malédiction Concerto with the Budapest Chamber Symphony for the Hungaroton label won the Grand Prix du Disque, and the following year he released a recording of four sonatas for piano and violin by Mozart with violinist Ernő Kállai, also issued by Hungaroton. Mr. Fejérvári’s most recent recording is Schumann, which he released on the ATMA Classique label in May 2020. In their review of the recording, Gramophone magazine said that Mr. Fejérvári is “a deeply communicative artist who combines an imperturbable yet magisterial command of his instrument with impeccable musicality. Those who have yet to hear him are in for a rare treat.”