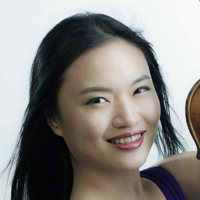 Violinist and violist Tien-Hsin Cindy Wu—who’s been praised by The Seattle Times as “simply marvelous” and Taiwan’s The Liberty Times for “astonishingly capturing the spirit of the music”—enjoys a versatile career as a soloist, chamber musician, and educator throughout North America, Europe, and Asia. She’s collaborated in concerts with renowned artists such as pianists Yefim Bronfman, Gary Graffman, and Yuja Wang; violinists Midori, Leila Josefowicz, Cho-Liang Lin, Ida Kavafian, and Anthony Marwood; violist Kim Kashkashian; cellist Lynn Harrell; bass-baritone Thomas Quasthoff; and members of the Alban Berg, Brentano, Cleveland, Emerson, Guarneri, Miró, and Tokyo string quartets; as a guest violist, she’s collaborated with the Dover, Formosa, Orion, and Shanghai string quartets. Her engagements include appearances at prominent venues such as the Kennedy Center and Library of Congress in Washington, DC, and Carnegie Hall and Lincoln Center in New York City, as well as prominent festivals such as the La Jolla Music Society’s SummerFest, the Marlboro Music Festival, the Mainly Mozart festival, and the Bridgehampton, Great Lakes, and Santa Fe chamber music festivals.

Ms. Wu is a recipient of many awards, including the Milka Violin Artist Prize from the Curtis Institute of Music and third prize at the International Violin Competition of David Oistrakh. She taught violin, chamber music, and string pedagogy at the University of Southern California’s Thornton School of Music from 2010 to 2015, and she’s coached chamber music at the Encore School for Strings and The Hotchkiss School’s Summer Portals. Currently she serves as the artistic partner of The Da Camera Society in Los Angeles.

In addition to her work in the classical music world, Ms. Wu collaborates with artists who perform in other genres. She appears on the album Bach in Los Angeles with German electric bassist Jacques Bono, and she’s performed with contemporary American musicians Jeremy Kittel and singer Aoife O’Donovan and made multiple recordings for the Spanish film composer Arturo Cardelús.