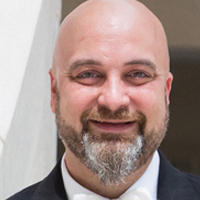 Mr. Soluri has made numerous solo appearances, including in Mozart’s Concerto for Bassoon in B-flat Major, K. 191; Weber’s Bassoon Concerto in F Major and Andante and Hungarian Rondo; David’s Concertino; R. Strauss’s Duett-Concertino; Andriessen’s Concertino; and Michael Daugherty’s Dead Elvis. In 2014, Mr. Soluri performed Marc Neikrug’s Concerto for Bassoon and Orchestra with the Milwaukee Symphony Orchestra, which co-commissioned the work. He also performed a concerto he commissioned from Jerod Tate called Ghost of the White Deer with the Dallas Symphony Orchestra in 2020.