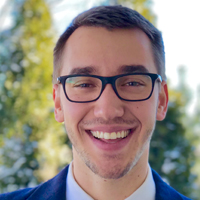 Originally from Dallas, Texas, M. Taylor Eiffert is currently second clarinet of the Winnipeg Symphony Orchestra in Canada. In the 2021 season, he also played bass clarinet for The Santa Fe Opera Orchestra. Before joining the WSO, he was a freelance clarinetist and music educator in Los Angeles, California, where he frequently performed with the Debut Chamber Orchestra and the Santa Monica Symphony Orchestra.

Mr. Eiffert was also the bass clarinet fellow for the Aspen Festival Orchestra during the 2015–17 seasons. He holds degrees from the University of Southern California and Northwestern University, where his primary teachers were Yehuda Gilad, Steve Cohen, and J. Lawrie Bloom. In his free time, Mr. Eiffert enjoys woodworking, drinking good coffee, and hiking with his dog, Stella.