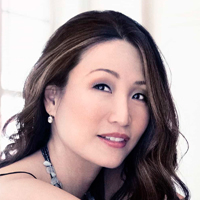 Korean American pianist Soyeon Kate Lee is the first-prize winner of the Naumburg International Piano Competition and the Concert Artist Guild International Competition. She’s been lauded by The New York Times as a pianist with “a huge, richly varied sound, a lively imagination and a firm sense of style” and by The Washington Post for her “stunning command of the keyboard.”

Highlights of Ms. Lee’s recent seasons include appearances on the Gina Bachauer Concerts series, with San Francisco Performances, and at The Cleveland Museum of Art, Purdue Convocations in Indiana, and the National Gallery of Art and Library of Congress in Washington, DC. She was a member of The Chamber Music Society of Lincoln Center’s Bowers Program, and she’s a regular performer at numerous festivals, including the Great Lakes, Santa Fe, and Music Mountain chamber music festivals. Ms. Lee has also collaborated with conductors Carlos Miguel Prieto, Rafael Frühbeck de Burgos, Jahja Ling, and Jorge Mester with the London, San Diego, and Hawaii symphony orchestras and the Naples and Louisiana philharmonic orchestras, among others.

As a Naxos recording artist, Ms. Lee’s discography spans the works of Scarlatti, Liszt, Scriabin, and Clementi. She also released an eco-awareness album for the E1 record label called Re!nvented, which garnered her the Classical Recording Foundation’s Young Artist of the Year Award.

Ms. Lee is a laureate of the Santander and Cleveland international piano competitions. She received her bachelor’s degree, master’s degree, and Artist Diploma from The Juilliard School, and she earned her doctorate at the CUNY Graduate Center. She’s worked extensively with pianists Richard Goode, Jerome Lowenthal, Robert McDonald, and Ursula Oppens.

In 2022, Ms. Lee joined Juilliard’s piano faculty. She also serves as an associate professor of music in piano at the University of Cincinnati-College Conservatory of Music, and she’s a member of the piano faculty of the Bowdoin International Music Festival.