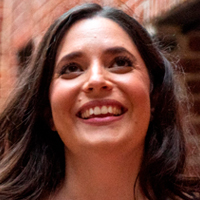 Rachel Blumenthal was appointed acting utility flute of the Baltimore Symphony Orchestra in 2021. She spends her summers performing with The Santa Fe Opera Orchestra, where she’s served as second flute/piccolo since 2019. Previously, she was a member of the Sarasota Opera Orchestra and the Des Moines Symphony, and she’s performed with the Chicago Symphony Orchestra, Lyric Opera Orchestra, and Grant Park Orchestra, among many other ensembles. She’s also been a fellow at numerous summer music festivals, including Tanglewood, Aspen, Brevard, and the National Repertory Orchestra.

In addition to performing, Ms. Blumenthal has taught students of all ages across the United States. From 2018 to 2020, she served on the chamber music faculty of the University of Chicago.

Ms. Blumenthal, who was born and raised in Chicago, began her musical studies at age nine, after her grandmother surprised her with a flute for her birthday. She received her undergraduate degree from the University of Michigan and her master’s degree from Carnegie Mellon University. She is immensely grateful for the support and guidance of all of her teachers, most especially Jeanne Baxtresser and Amy Porter.