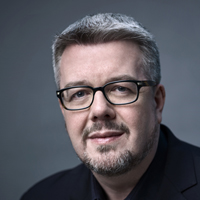 Acclaimed for his inspirational performances and eloquent musicianship, Paul Watkins enjoys a distinguished career as a concerto soloist, chamber musician, and conductor. He’s the artistic director of the Great Lakes Chamber Music Festival in Detroit, the cellist of the Emerson String Quartet and Chien-Kim-Watkins Trio, and a visiting professor of cello at the Yale School of Music. He took first prize in the 2002 Leeds Conductors Competition, and he’s served as music director of the English Chamber Orchestra and principal guest conductor of the Ulster Orchestra.

Mr. Watkins gives regular concerto performances with the major British orchestras, including at the BBC Proms, where he’s appeared most recently with the BBC Symphony Orchestra, led by Thomas Adès, in Lutosławski’s Cello Concerto, as well as with the BBC National Orchestra of Wales in the world premiere of the Cello Concerto composed for him by his brother, Huw Watkins. He’s performed with prestigious orchestras across the globe, including the Hong Kong and Netherlands philharmonic orchestras; Antwerp, Colorado, Melbourne, Queensland, and RAI National symphony orchestras; Konzerthausorchester Berlin; and Norwegian Radio Orchestra under the batons of such renowned conductors as Paavo Berglund, Leonard Slatkin, Sakari Oramo, Gianandrea Noseda, Sir Mark Elder, Richard Hickox, Sir Andrew Davis, and Sir Charles Mackerras. He premiered (and was the dedicatee of) Mark-Anthony Turnage’s new Cello Concerto with the Antwerp Symphony Orchestra and Edo de Waart, the Tampere Philharmonic Orchestra and Hannu Lintu, the Royal Liverpool Philharmonic Orchestra and Vasily Petrenko, and the Leipzig Gewandhaus Orchestra and Andris Nelsons.

A dedicated chamber musician, Mr. Watkins was a member of The Nash Ensemble from 1997 to 2013, until he joined the Emerson String Quartet. With the Emerson, he’s traveled extensively, performing at major international festivals such as Tanglewood, Aspen, Ravinia, Edinburgh, Berlin, and Evian, and he’s collaborated with distinguished artists such as pianists Emanuel Ax, Yefim Bronfman, and Evgeny Kissin and sopranos Renée Fleming and Barbara Hannigan.

Highlights of Mr. Watkins’s recent seasons include his conducting debuts with the Minnesota Orchestra and Detroit Symphony Orchestra as well as concerto appearances with the BBC Symphony Orchestra under Semyon Bychkov and Sir Andrew Davis, the City of Birmingham Symphony Orchestra under Alexander Vedernikov, and the European Union Youth Orchestra under Bernard Haitink in a tour featuring performances at the Grafenegg Festival in Austria and The Concertgebouw in Amsterdam. He also made regular appearances with The Chamber Music Society of Lincoln Center and performed Brahms’s Double Concerto with violinist Lawrence Power on a tour of Sweden and the United Kingdom with the Västerås Sinfonietta under Simon Crawford-Phillips.

Mr. Watkins’s extensive discography as a cellist includes a wide range of repertoire for Chandos Records, including Britten’s Cello Symphony; concertos by Delius, Elgar, Finzi, Lutosławski, Walton, Scott, and Tobias Picker; and works for cello and piano by Mendelssohn, Martinů, and 20th-century British and American composers performed with his brother, Huw, on the piano. He’s recorded the Britten Suites for Solo Cello and 20th-century British repertoire for Nimbus Records, Takemitsu’s Orion and Pleiades for BIS Records, and, as a conductor, music by Mozart, Glière, and Röntgen as well as a Grammy-nominated pairing of the Berg and Britten violin concertos with violinist Daniel Hope.

Paul Watkins plays a cello made by Domenico Montagnana and Matteo Goffriller in Venice, ca. 1730.