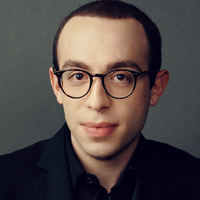 Pianist and composer Nicolas Namoradze, whose performances have been hailed as “sparkling … sensitive and coloristic” by The New York Times, came to international attention in 2018, when he won the triennial Honens International Piano Competition—the largest piano prize in the world. His often-sold-out recitals around the world have been met with universal critical acclaim, and his debut album (on the Hyperion label) received extraordinary accolades, as did his latest album (on the Steinway & Sons label), Arabesque. Mr. Namoradze has been named a Gramophone One to Watch, a BBC Music Magazine Rising Star, and one of WQXR’s Artists to Watch.

Highlights of Mr. Namoradze’s summer engagements and upcoming 2022–23 season include residencies at the Toronto Summer Music festival and Honens; performances at the Santa Fe Chamber Music Festival, Le Festival Radio France Occitanie Montpellier, and Beethovenfest in Bonn, Germany; and more. His recent seasons featured appearances at Carnegie Hall in New York City, Tanglewood in Massachusetts, the Konzerthaus Berlin, and the Telavi International Music Festival in Georgia as well as performances with the London Philharmonic Orchestra and Budapest Festival Orchestra, among other ensembles.

As a composer, Mr. Namoradze has enjoyed commissions from and performances of his works by such leading artists and ensembles as Ken-David Masur, Tessa Lark, the Metropolis Ensemble, and the Verona Quartet, and his music has been heard at such festivals as the Santa Fe Chamber Music Festival, Chelsea Music Festival in New York City, Honens Festival in Canada, and Ruhr Piano Festival in Germany, among others.

Nicolas Namoradze was born in Tbilisi, Georgia, and grew up in Budapest, Hungary. His teachers and mentors have included pianists Emanuel Ax and Sir András Schiff and composer John Corigliano.