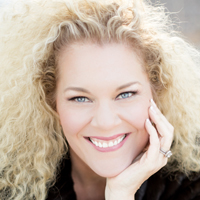 Michelle DeYoung has already established herself as one of the most exciting artists of her generation.

Ms. DeYoung’s recording of Kindertotenlieder and Mahler’s Symphony No. 3 with Michael Tilson Thomas and the San Francisco Symphony (SFS Media) was awarded the 2003 Grammy Award for Best Classical Album. She has also been awarded the 2001 Grammy Awards for Best Classical Album and Best Opera Recording for Les Troyens with Sir Colin Davis and the London Symphony Orchestra (LSO Live). Her growing discography also includes recordings of Mahler Symphony No. 3 with the Chicago Symphony Orchestra and Bernard Haitink (CSO Resound) and with the Pittsburgh Symphony and Manfred Honeck (PID); Bernstein’s Symphony No. 1, ‘Jeremiah’ with the BBC Symphony Orchestra and Leonard Slatkin (Chandos), Das Klagende Lied with the San Francisco Symphony and Michael Tilson Thomas (BMG),and Das Lied von der Erde with the Minnesota Orchestra (Reference Recordings). Her first solo disc was released on the EMI label.