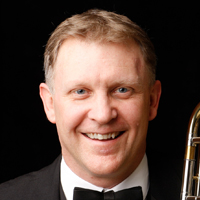 Mark Fisher is assistant principal trombone with the Lyric Opera of Chicago and principal trombone for The Santa Fe Opera Orchestra. He has performed with virtually every major ensemble in Chicago and as substitute with many of the nation’s leading orchestras. Also an accomplished euphoniumist and prize winner of numerous international solo competitions, he founded and directs the Chicago Trombone Consort. Head of the trombone department at DePaul University, he has also served on the faculties of the University of Michigan and Northwestern, Roosevelt, and Northern Illinois universities and the Banff International Festival. He is a graduate of the University of Northern Iowa and the New England Conservatory of Music.