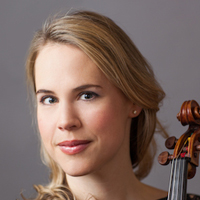 Margaret Dyer Harris is assistant principal viola for The Santa Fe Opera Orchestra and a member of the New York City–based orchestra The Knights. She was a founding member of the Grammy-nominated chamber orchestra A Far Cry, and she’s performed with various other ensembles, such as ECCO and the Moscow, Orpheus, and Saint Paul chamber orchestras. Her first exposure to chamber music was in her childhood living room, watching her mother, Saskia, join friends to read string quartets. Since then, she’s had the pleasure of performing these works all over the world (and sometimes in her childhood living room with her mother).

Ms. Harris is in frequent demand as a guest principal violist, most recently appearing in that role with the Sarasota Orchestra, Santa Fe Opera Orchestra, Princeton Symphony Orchestra, Brooklyn Philharmonic, and Long Island Philharmonic. She has a strong passion for cultural collaboration and community involvement, and in 2010, she was granted a fellowship position in Carnegie Hall’s Ensemble Connect program, which was created by Carnegie Hall, The Juilliard School, and the Weill Music Institute in partnership with the New York City Department of Education. Ms. Harris has also been a guest artist and teacher at the Guildhall School of Music in London, Royal Conservatoire of Scotland, and Yellow Barn Young Artists Program, and she’s given master classes in Mexico City, Lima, Abu Dhabi, and cities across the United States. In 2016, Ms. Harris visited Sing Sing Correctional Facility several times as a guest artist for Carnegie Hall’s Musical Connections program, working with prisoners who were learning to play instruments and write songs in order to prepare for two culminating performances of their works for other inmates.