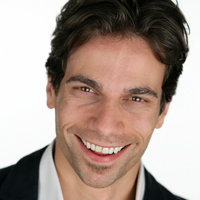 Bass-baritone Kelly Markgraf has been praised by The New York Times for his “heart-stirring” singing and “charismatic” stage presence. Respected as a singing actor of depth and versatility, he’s performed music from the Baroque era to that present day, including works composed specifically for him.

In the summer of 2017, Mr. Markgraf created the role of Paul Jobs in Mason Bates’s opera The (R)evolution of Steve Jobs, which premiered at The Santa Fe Opera and went on to win a 2019 Grammy Award for Best Opera Recording. Mr. Markgraf also created the role of Hannah before in Laura Kaminsky’s transgender opera As One, which is one of the most frequently performed new operas in the country. Since appearing in the work’s widely acclaimed premiere at the Brooklyn Academy of Music in 2014, Mr. Markgraf has reprised his role as Hannah before many times, including in recent productions with Opera Colorado and San Diego Opera.

Mr. Markgraf has enjoyed collaboration with some of the world’s most esteemed conductors, including Gustavo Dudamel, Charles Dutoit, Alan Gilbert, Giancarlo Guerrero, Michael Tilson Thomas, David Robertson, Robert Spano, and Edo de Waart. He’s performed with the nation’s leading symphony orchestras, including the New York Philharmonic, Los Angeles Philharmonic, and Boston Symphony Orchestra. He made his debut with the San Francisco Symphony, led by Mr. Thomas, in 2013, in the role of Bernardo in a live concert recording of Bernstein’s West Side Story, which was nominated for a Grammy Award. In 2019, he again worked with Mr. Thomas and the San Francisco Symphony in a semi-staged production of Ravel’s L’Enfant et les Sortilege alongside mezzo-soprano Isabel Leonard, and he also gave his first concert performances, with the Brazos Valley Symphony Orchestra, of Orff’s Carmina burana.

The 2018–19 season marked the release of Mr. Markgraf’s world premiere recording of John Harbison’s Requiem with Giancarlo Guerrero and the Nashville Symphony on the Naxos label as well as the release of the original cast recording of As One. Mr. Markgraf also created the role of Ring Lardner in Joel Puckett’s The Fix at Minnesota Opera.

Highlights of Mr. Markgraf’s 2017–18 season included his debut with the NHK Symphony Orchestra in Tokyo for concert performances of West Side Story led by Paavo Järvi; encore productions of As One with the Chautauqua Opera Company, Hawaii Opera Theatre, and San Diego Opera; and concert performances of Bernstein’s opera Trouble in Tahiti with the Tucson Symphony Orchestra. In the summer of 2018, Mr. Markgraf collaborated with the Fry Street Quartet for performances of Barber’s Dover Beach at the Chautauqua Institution and reprised his role as Sam in Trouble in Tahiti at the National Concert Hall in Taiwan.

Committed to unique collaborations and creating new works, Mr. Markgraf has given the US premiere of Shostakovich’s Front Ways Songs at Symphony Space in New York City; presented rare songs of Viktor Ullmann, who was killed during the Holocaust, at Alice Tully Hall; sang the role of Allazim in Mozart’s unfinished opera Zaide at Carnegie Hall’s Zankel Hall; and appeared as Mamoud in John Adams’s opera The Death of Klinghoffer, conducted by the composer.

An artist of unusual versatility, Mr. Markgraf was lauded for his agile dancing in his portrayal of Dick McGann in Kurt Weill’s Street Scene at Opera Theatre of St. Louis, and he can be seen on DVD with the San Francisco Symphony at Carnegie Hall in choreographed excerpts from West Side Story, performing alongside baritone Thomas Hampson and cellist Yo-Yo Ma.

Mr. Markgraf’s discography also includes the world-premiere recordings of Ricky Ian Gordon’s The Grapes of Wrath and Carlisle Floyd’s Wuthering Heights and two albums of chamber music from Music@Menlo. Mr. Markgraf has been seen on PBS’s nationally televised Great Performances series and heard on NPR’s Performance Today. He holds degrees from Boston University, the University of Cincinnati’s College-Conservatory of Music, and The Juilliard School.