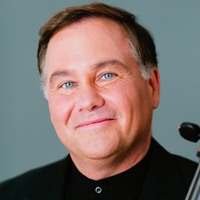 Cellist Keith Robinson is a founding member of the award-winning Miami String Quartet, and he’s been an active chamber musician, recitalist, and soloist since he graduated from the Curtis Institute of Music. He’s made numerous solo appearances with orchestras throughout the United States, including the American Sinfonietta, New World Symphony, and Miami Chamber Symphony, and in 1989 he won the P.A.C.E. Classical Artist of the Year Award.

Keith Robinson hails from a musical family, and his siblings include cellist Sharon Robinson, of the Kalichstein-Laredo-Robinson Trio, and Hal Robinson, principal bass of The Philadelphia Orchestra. Mr. Robinson plays a Carlo Tononi cello made in Venice in 1725.