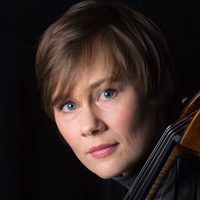 Swedish cellist Kajsa William-Olsson is frequently heard as a soloist, a chamber musician, and an orchestral musician throughout the world. After early studies in Gothenburg and Stockholm, she played with the Gothenburg Symphony Orchestra, and since 1996, she’s been a member of the Royal Stockholm Philharmonic Orchestra. Ms. William-Olsson was awarded Sweden’s Gunnar de Frumerie Prize in Music in 2001. That same year, she made her United States debut in Carnegie Hall’s Weill Recital Hall in New York City.

As a founding member of the VITALIS and Hanna String Quartets, Ms. William-Olsson has performed extensively throughout Europe. As a member of the ARK trio for soprano, cello, and piano, she’s commissioned and performed new pieces for their unique setting. Ms. William-Olsson regularly teaches and performs at the Music Masters Course Japan (MMCJ) festival, and she appears as a chamber musician at such festivals as the Aspen Music Festival, Santa Fe Chamber Music Festival, Sangat Festival in Mumbai, and Salt Bay Chamberfest in Maine.

Ms. William-Olsson has performed concertos in the United States, Europe, and Asia. She was the featured soloist in Tan Dun’s Cello Concerto, with the composer conducting, in Norway and China. She’s collaborated with composers Marc Neikrug, Kim Sherman, Dina Pruzhansky, Moshe Knoll, Michael Ching, and renowned chamber musicians including Eric Kim, Emanuel Ax, Joyce Yang, and her husband, Alan Gilbert. A fun fact is that in June 2017, Ms. William-Olsson was invited to be one of 21 international musicians to join the New York Philharmonic for special performances marking the end of Alan Gilbert’s tenure as music director.