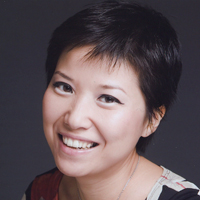 June Han has been hailed as a “true and tasteful harpist…[with] exceptionally varied phrasing and a surprising yet innate sense of timing” by the Concert Review Magazine following her recital debut at Carnegie Hall.

Ms. Han is an active proponent of chamber and contemporary music and has performed with The Chamber Music Society of Lincoln Center; Speculum Musicae; Music from Japan; the Manhattan Sinfonietta; the Group for Contemporary Music; the Jupiter Symphony Chamber Players; Ensemble 21; Mabou Mines; Alarm Will Sound; and the Bronx Arts, Sequitur, and Talea ensembles. As an orchestral musician, she’s collaborated with the Orchestre de Paris, the Mariinsky Orchestra, and the Kirov and New York City opera orchestras, and she frequently performs with the New York Philharmonic and the Boston Symphony and Metropolitan Opera orchestras. She’s also appeared as a solo artist with the Oshawa-Durham Symphony Orchestra, Colonial Symphony, and Aspen Young Artist Orchestra.

Ms. Han holds a premier prix in harp and chamber music from the Conservatoire National Supérieur de Musique et de Danse de Paris, a master-of-music degree and artist diploma from the Yale School of Music, and a doctor-of-musical-arts degree from The Juilliard School. She serves on the faculties of the Yale School of Music, Columbia University’s Music Performance Program, The Juilliard School’s Pre-College Division, and the Bowdoin International Music Festival. Ms. Han has held master classes at Juilliard, Seoul National University, Boston University, the New England Conservatory, and the Boston Conservatory. In 2018, she joined the online faculty roster for the Harp Column Academy, and in July 2019 she was featured in the cover story of Harp Column magazine.