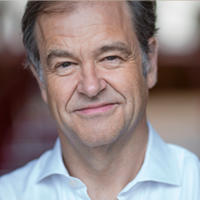 Pianist Julius Drake lives in London and enjoys an international reputation as one of the finest instrumentalists in his field, collaborating with many of the world’s leading artists both in recital and on disc. His passionate interest in song has led to invitations to devise song series for London’s Wigmore Hall, Amsterdam’s Concertgebouw, New York’s 92nd Street Y, and Berlin’s Pierre Boulez Saal. He curates an annual series of song recitals—called Julius Drake and Friends—in the historic Middle Temple Hall in London.

Among Mr. Drake’s many recordings are a widely acclaimed series with bass-baritone Gerald Finley for Hyperion Records that includes the Gramophone Award–winning Songs by Samuel Barber, Schumann: Dichterliebe and Other Heine Settings, and Britten: Songs and Proverbs of William Blake. Additional recordings include collaborations with tenor Ian Bostridge and mezzo-soprano Alice Coote for EMI, mezzo-sopranos Joyce DiDonato and Lorraine Hunt Lieberson and tenor Matthew Polenzani for Wigmore Hall Live, and soprano Anna Prohaska for Alpha. Mr. Drake’s recording of Janáček’s The Diary of One Who Disappeared, with tenor Nicky Spence and mezzo-soprano Václava Housková for Hyperion Records, won both the Gramophone and BBC Music Magazine awards in 2020.

Concerts this season include recitals in Barcelona and Vilabertran with mezzo-soprano Dame Sarah Connolly and soprano Julia Kleiter, at the Salzburg Festival with Mr. Finley, at the Schubertiade festival in Austria with tenor Christoph Prégardien and Mr. Bostridge, at the Vienna Konzerthaus with Ms. Prohaska, at Wigmore Hall with mezzo-soprano Catriona Morison and baritone Konstantin Krimmel, in Brussels and Madrid with soprano Eva-Maria Westbroek, and on a major US tour with Mr. Finley.

Mr. Drake holds a professorship at the University of Music and Performing Arts Graz, where he teaches a class for song pianists. He’s also a professor of collaborative piano at the Guildhall School of Music and Drama in London, and he’s regularly invited to give master classes worldwide.