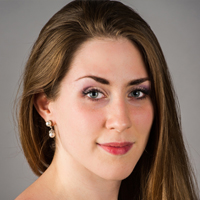 Ms. Harguindey was the first-prize winner in the woodwind category at the 2015 Prix d’Europe, the second-prize winner at the 2014 OSM Standard Life Competition, and a recipient of the 2012 and 2014 Sylva Gelber Music Foundation Award. She’s toured with the Pacific Music Festival, Curtis Symphony Orchestra, and Orchestra of the Americas.

After immigrating to Canada in 1991, Ms. Harguindey studied at the Conservatoire de musique du Québec à Montréal and, later, at the Curtis Institute of Music in Philadelphia. Her teachers have included Daniel Matsukawa, Mathieu Harel, and Eugene Izotov.