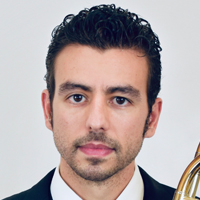 A dedicated teacher, Mr. Randazzo is an adjunct trombone professor at NC State University, and he’s in high demand as a private trombone instructor. Over the past several years, he’s been hired as a guest artist-clinician at DePaul University, the University of North Carolina School of the Arts, East Carolina University, Gardner-Webb University, and Appalachian State University. He’s also a founding member of the Santa Fe Trombone Summit, an educational trombone workshop featuring master classes, sectionals, quartet coachings, and performances.