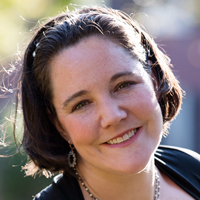 Grammy Award winner Jennifer Montone has been praised by The New York Times for her “flawless horn solos . . . and warm and noble sound.” She serves as principal horn of The Philadelphia Orchestra and is an internationally acclaimed soloist, chamber musician, and teacher. She’s been on the faculties of the Curtis Institute of Music and The Juilliard School since she joined The Philadelphia Orchestra in 2006.

Previously, Ms. Montone served as principal horn of the St. Louis Symphony Orchestra, associate principal horn of the Dallas Symphony Orchestra, and third horn of the New Jersey Symphony, and she appeared as a guest artist with the Berlin and New York philharmonics and the Cleveland, Metropolitan Opera, Saint Paul Chamber, and Orpheus Chamber orchestras. She was an adjunct professor at Southern Methodist University and a performer/faculty member at the Aspen Music Festival and School, and she coaches on occasion at the New World Symphony orchestral academy in Miami Beach.

Ms. Montone made her Carnegie Hall solo recital debut in Carnegie’s Weill Recital Hall in 2008. She’s enjoyed appearing as a featured artist at many International Horn Society workshops and as a soloist and collaborator with artists such as pianists Emanuel Ax and Christoph Eschenbach, bass-baritone Eric Owens, violinists Shmuel Ashkenasi and Joseph Silverstein, and cellist David Soyer, among many others.

Ms. Montone is a native of northern Virginia, and she studied with Edwin Thayer, principal horn of the National Symphony Orchestra, in the National Symphony Orchestra Youth Fellowship Program. She’s a graduate of The Juilliard School, where she studied with Julie Landsman, the legendary pedagogue and former principal horn of the Metropolitan Opera Orchestra. Her honors include winning the prestigious Avery Fisher Career Grant in 2006 and the Bob Paxman Young Horn Player of the Year Award in 1996. She’s married to double bass player Timothy Ressler, and she immensely enjoys spending time with her two young sons, Max and Felix.