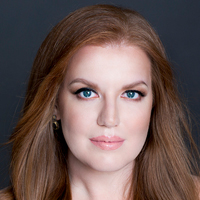 A naturally gifted singer noted for her commanding stage presence and profound artistry, mezzo-soprano Jennifer Johnson Cano has garnered critical acclaim for committed performances of both new and standard repertoire.

For her 2019 appearances as Offred in Poul Ruders’s opera The Handmaid’s Tale, Ms. Cano was lauded as a “consummate actress” by The Wall Street Journal and a “tour de force” by The Boston Globe; The New York Times praised her “towering…restless, powerful, and profound” performance and described her as being “as formidable as this astonishingly demanding role deserves.” In 2018, Bachtrack called her recital performance with soprano Anna Netrebko at Carnegie Hall “self-effacing and full of musicality.” Ms. Cano has performed at The Metropolitan Opera more than 100 times, with her most recent roles including Nicklausse in Offenbach’s The Tales of Hoffmann, Emilia in Verdi’s Otello, Hansel in Humperdinck’s Hansel and Gretel, and Meg Page in Verdi’s Falstaff.

Following engagements at the Bravo! Vail Music Festival with the New York Philharmonic, the Blossom Music Festival with The Cleveland Orchestra, and the Ravinia Festival with tenor Matthew Polenzani, Ms. Cano ended the summer of 2019 with performances of Beethoven’s Symphony No. 9 at the Hollywood Bowl with the Los Angeles Philharmonic. In the 2019–20 season, she appeared at the Opening Night Gala of the San Francisco Symphony, led by Music Director Michael Tilson Thomas; performed Argento’s song cycle From the Diary of Virginia Woolf in a recital presented by Da Camera of Houston; and joined pianist Benjamin Hochman and friends for Janáček’s song cycle The Diary of One Who Disappeared at the 92nd Street Y in New York City. She received rave reviews for her Opera Philadelphia debut, singing Verdi’s Requiem with just 24 hours’ notice before the first performance, and she appeared in the title role in Bizet’s Carmen at the New Orleans Opera.

In 2014, Ms. Cano released her completely live and unedited debut recital recording, Unaffected: Live from the Savannah Voice Festival, with pianist Christopher Cano. Other recent recordings include a live performance of Beethoven’s Symphony No. 9 with Manfred Honeck and the Pittsburgh Symphony Orchestra; Bernstein’s Symphony No. 1, Jeremiah, with Marin Alsop and the Baltimore Symphony Orchestra; and a live recording of Mahler’s Das Lied von der Erde with tenor Paul Groves and the St. Luke’s Chamber Ensemble, led by George Manahan.

Ms. Cano is a native of St. Louis, Missouri. She earned degrees from Webster University and Rice University and was honored as a distinguished alumna and commencement speaker at Webster University in May 2017. She joined the Lindemann Young Artist Development Program at The Metropolitan Opera after winning the Metropolitan Opera National Council Audition, and she made her Met debut during the 2009–10 season. Her honors include winning First Prize at the Young Concert Artists International Auditions, a Sara Tucker Study Grant and a Richard Tucker Career Grant from the Richard Tucker Music Foundation, and a George London Award.