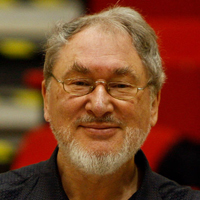 Composer, conductor, and chansonnier HK Gruber was born in Vienna in 1943. He sang with the Vienna Boys’ Choir as a child and went on to study at the Vienna Hochschule für Musik. In 1961, he began playing double bass with Ensemble die reihe, and from 1969 to 1998 he played in the Vienna Radio Symphony Orchestra. Mr. Gruber first began performing as a singer/actor with the MOB art and tone ART ensemble, which he cofounded in 1968 with fellow Viennese composers Kurt Schwertsik and Otto Zykan.

Composing in his own highly individual style, Mr. Gruber has written works for the world’s foremost artists and orchestras. His compositions have been performed by ensembles such as the Vienna, New York, and Berlin philharmonic orchestras and at venues and events such as Carnegie Hall, the BBC Proms, and the Lucerne Festival.

Mr. Gruber is particularly noted for his concertos, including Aerial, which he wrote for trumpeter Håkan Hardenberger and which has received more than 60 performances; two violin concertos for Ernst Kovacic; his Cello Concerto, written for Yo-Yo Ma; Busking, for Mr. Hardenberger and for accordion, banjo, and string orchestra; and his percussion concertos Rough Music and Into the Open, written for Colin Currie. Orchestral scores include Dancing in the Dark, which was premiered by Sir Simon Rattle and the Vienna Philharmonic. Recent works include the opera Geschichten aus dem Wiener Wald (Tales from the Vienna Woods), which premiered at the Bregenz Festival in 2014, and a major new Piano Concerto that Emanuel Ax and the New York Philharmonic, led by Alan Gilbert, premiered in 2017. The concerto was co-commissioned by the New York Philharmonic, Royal Stockholm Philharmonic Orchestra, Berlin Philharmonic, and Tonhalle-Orchester Zürich.

An active conductor with many major international orchestras, Mr. Gruber has led the Tonhalle-Orchester Zürich; Bavarian Radio Symphony Orchestra; Los Angeles, Royal Stockholm, and Vienna philharmonic orchestras; and Cleveland, Leipzig Gewandhaus, Mahler Chamber, and Philharmonia orchestras, among others. From 2009 to 2015, he served as composer/conductor for the BBC Philharmonic.

Mr. Gruber has performed extensively as a chansonnier, most notably in his most popular work, Frankenstein!!, which he premiered with Sir Simon Rattle and the Royal Liverpool Philharmonic in 1978 and which has received more than 600 performances around the world. He’s also performed and recorded the works of Kurt Weill and Hanns Eisler as well as Schoenberg’s Pierrot lunaire and Sir Peter Maxwell Davies’s Eight Songs for a Mad King.

For the 2019–20 season, Mr. Gruber was the Gewandhaus composer for the Leipzig Gewandhaus Orchestra; the scheduled world premiere of his new orchestral work Short Stories from the Vienna Woods, which was co-commissioned by the Leipzig Gewandhaus and the Boston Symphony Orchestra, was postponed. In the spring of 2021, Mr. Gruber is due to conduct Kurt Weill’s Der Silbersee at the Komische Oper Berlin and with the Swedish Chamber Orchestra as well as Weill’s Die sieben Todsünden at the Kurt Weill Festival in Dessau and, alongside his own Zeitfluren, with the Southwest German Radio Symphony Orchestra in Freiburg.

On recent CD releases, Mr. Gruber has conducted music by Brett Dean with the Swedish Chamber Orchestra for BIS Records and works by Kurt Schwertsik with the BBC Philharmonic for Chandos Records. He has also recorded several of his own works for both labels. Mr. Gruber’s works are published by Boosey & Hawkes.

In 2002, Mr. Gruber was awarded Austria’s most prestigious cultural prize, the Grand Austrian State Prize, and in 2009 he was named an honorary member of the Vienna Konzerthaus, an honor whose previously recipients include Igor Stravinsky, Pierre Boulez, Leonard Bernstein, and Claudio Abbado. Mr. Gruber is also an honorary lifetime trustee of the Kurt Weill Foundation for Music.