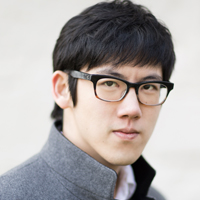 Since his gold medal win at the 13th Van Cliburn International Piano Competition in 2009, Haochen Zhang has captivated audiences in the United States, Europe, and Asia with a unique combination of deep musical sensitivity, fearless imagination, and spectacular virtuosity. In 2017, he received the prestigious Avery Fisher Career Grant, which recognizes talented musicians with the potential for a major career in music.

Mr. Zhang has appeared at many of the world’s most prestigious festivals and venues and with many of the world’s leading orchestras. His engagements have included the BBC Proms with the China Philharmonic and conductor Yu Long; The Philadelphia Orchestra with Yannick Nézet-Séguin; the Munich Philharmonic with Lorin Maazel on a sold-out tour in Munich and China; the Sydney Symphony Orchestra with David Robertson on a tour of China; the NDR Elbphilharmonie Orchestra with Thomas Hengelbrock on a tour of Tokyo, Beijing, and Shanghai; the London, Los Angeles, and New York philharmonics; the London Symphony Orchestra; and solo and concerto performances at Carnegie Hall in New York City.

Highlights for this summer include performances with The Philadelphia Orchestra, led by Nathalie Stutzmann, at the Bravo! Vail Music Festival and the National Orchestra of Metz at The Concertgebouw in Amsterdam as well as recitals in China and appearances at the International Keyboard Odyssiad & Festival and the Santa Fe Chamber Music Festival. The upcoming 2022–23 season features performances with the Staatskapelle Berlin, NHK Symphony Orchestra, and Memphis Symphony Orchestra, chamber music and concerto tours in Asia, and more.

Haochen Zhang is also an avid chamber musician and has collaborated with colleagues such as the Shanghai, Tokyo, and Brentano string quartets. He’s frequently invited to appear with chamber music festivals in the United States, including the Santa Fe Chamber Music Festival and the La Jolla Music Society’s SummerFest.