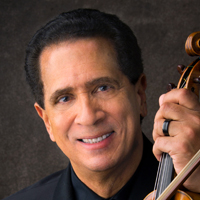 One of the most versatile and respected musical artists of his generation, Guillermo Figueroa is renowned as a conductor, violinist, violist, and concertmaster. He serves as principal conductor of The Santa Fe Symphony Orchestra and Chorus as well as music director of the Music in the Mountains Festival in Colorado and the Lynn Philharmonia in Florida. Previously, Mr. Figueroa served as music director of the New Mexico and Puerto Rico Symphony Orchestras. With the latter ensemble, he performed to critical acclaim at Carnegie Hall in New York City in 2003; at The Kennedy Center in Washington, DC, in 2004; and in Spain in 2005.

A renowned violinist, Mr. Figueroa’s recordings of Ernesto Cordero’s violin concertos for the Naxos label received a Latin Grammy nomination in 2012. He served as concertmaster of the New York City Ballet Orchestra, and he was a founding member and concertmaster of the Orpheus Chamber Orchestra, with whom he made more than 50 recordings for Deutsche Grammophon. As an accomplished violist, he frequently performs as a guest of the Fine Arts, American, Amernet, and Orion string quartets.

Mr. Figueroa has given the world premieres of four violin concertos written for him: the Concertino by Mario Davidovsky, with the Orpheus Chamber Orchestra at Carnegie Hall in 1995; the Double Concerto by Harold Farberman, with the American Symphony Orchestra at Lincoln Center’s Avery Fisher Hall in 2007; the Violin Concerto by Miguel del Aguila, with the New Mexico Symphony Orchestra (which, along with Mr. Figueroa, commissioned the work) in Albuquerque in 2008; and Ínsula: Suite Concertante by Ernesto Cordero, with I Solisti di Zagreb in Zagreb in 2009. His festival appearances include the Santa Fe Chamber Music Festival and Music from Angel Fire in New Mexico, Music in the Vineyards in California, and Festival Groba in Spain. His discography includes three violin sonatas by Bartók with pianist Robert Koenig for the Eroica Classical label and an album of virtuoso violin music with pianist Ivonne Figueroa for the NMSO label.

Guillermo Figueroa studied with his father and uncle at the Conservatory of Music of Puerto Rico. At The Juilliard School, his teachers were Oscar Shumsky and Felix Galimir. His conducting studies were with Harold Farberman in New York.