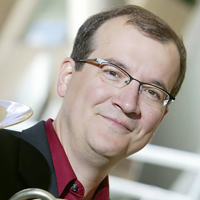 Gregory Flint is an associate professor of horn at the University of Wisconsin-Milwaukee. Prior to his UWM appointment, he taught horn at DePaul University and brass chamber music at his alma mater, Northwestern University.

As a soloist, clinician, and chamber musician, Mr. Flint has performed and given master classes throughout the United States and in Spain, Costa Rica, Brazil, Colombia, and Taiwan. As an orchestral musician, he serves as principal horn of the Elgin Symphony Orchestra and Joffrey Ballet Orchestra, and he’s performed with the Chicago, Milwaukee, Colorado, Honolulu, and Key West symphony orchestras as well as with the Grant Park, Ravinia Festival, and Lyric Opera of Chicago orchestras. During the summer months, he’s a member of The Santa Fe Opera Orchestra.

A strong advocate of contemporary music, Mr. Flint has had several solo compositions written for him, and he’s performed numerous world premieres with the Milwaukee-based new-music ensemble Present Music, with the Fulcrum Point New Music Project and Contemporary Chamber Players in Chicago, and on the Music from Almost Yesterday and Chamber Music Milwaukee series at UWM. Mr. Flint’s long-held position as first horn with the Chicago Jazz Orchestra has provided him opportunities to perform and record with such jazz luminaries as Clark Terry, Roy Hargrove, Nicholas Payton, Jon Faddis, Ernie Watts, and Frank Sinatra.