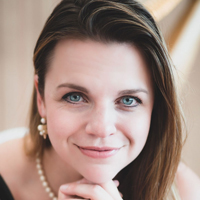 Grace Browning is principal harp of the Rochester Philharmonic Orchestra and The Santa Fe Opera Orchestra. She can be heard on Grammy Award–winning recordings by both ensembles: American Rapture and The (R)evolution of Steve Jobs, respectively. In 2014, she became principal harp of The Dallas Opera, and in 2018, she made her debut with The Metropolitan Opera. She’s performed with the Dallas Symphony Orchestra and The PhiladelphiaOrchestra, and she performed as guest principal harp on the Houston Symphony’s 2018 European Tour. Her festival appearances include Tanglewood, the Spoleto Festival USA, the Aspen Music Festival, the Pacific Music Festival, and the National Repertory Orchestra. She also collaborates with Chatter in Albuquerque and the Society for Chamber Music in Rochester. Ms. Browning has performed as a soloist with the Rochester Philharmonic Orchestra, Pacific Symphony, New World Symphony, and National Repertory Orchestra.