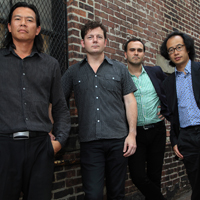 The FLUX Quartet has performed to great acclaim worldwide, including at the Tate Modern in London with BBC Radio 3; the Park Avenue Armory and Carnegie Hall’s Zankel Hall in New York City; The Kennedy Center in Washington, DC; the Walker Art Center in Minneapolis; Mount Tremper Arts and EMPAC in New York State; LACMA in Los Angeles; and international festivals in Australia, Europe, and Asia. The group’s discography includes recordings on the Cantaloupe, Innova, New World, and Tzadik labels, in addition to the full string quartet catalog of Morton Feldman on Mode Records. FLUX also recently released a live recording of the complete quartet output of Toshi Ichiyanagi, an innovator of the Japanese avant-garde.

Violinist Tom Chiu, who was strongly influenced by the “anything goes” philosophy of Fluxus, founded the FLUX Quartet in the late 1990s. FLUX has since cultivated an uncompromising repertoire that combines works by late-20th-century iconoclasts like Nancarrow, Cage, Ligeti, Scelsi, and Xenakis with pioneers of today like George Lewis, David First, Oliver Lake, Wadada Leo Smith, and many others. To support the creation of new works, FLUX actively commissions and has been awarded grants from the American Composers Forum, The Aaron Copland Fund for Music, the Fromm Foundation, Meet the Composer, New Music USA, and Chamber Music America.