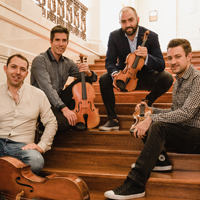 The Escher String Quartet has received acclaim for their profound musical insight and rare tonal beauty. A former BBC New Generation Artist and recipient of the Avery Fisher Career Grant, they’ve performed at London’s Cadogan Hall for the BBC Proms and are regular guests at London’s Wigmore Hall, while, in their hometown of New York City, they’re season artists of The Chamber Music Society of Lincoln Center.

In the 2021–22 season, the quartet tours the United States extensively, performing at Alice Tully Hall and The Rockefeller University in New York City; The Kennedy Center in Washington, DC; the Segerstrom Center for the Arts in Costa Mesa; the La Jolla Music Society’s SummerFest; the Savannah Music Festival; the Santa Fe Chamber Music Festival; and Chamber Music Detroit. Abroad, they return to Wigmore Hall and the Sociedad Filarmónica de Bilbao.

The quartet has made a distinctive impression throughout Europe, having made recent debuts at Amsterdam’s Concertgebouw, Berlin’s Konzerthaus, London’s Kings Place, Paris’s Auditorium du Louvre, Les Grands Interprètes Geneva, Slovenian Philharmonic Hall, and the Tel Aviv Museum of Art. Their festival appearances include the Heidelberg Spring Festival, Kamara.hu at the Liszt Academy in Budapest, the Great Music in Irish Houses festival in Dublin, the Risør Chamber Music Festival in Norway, the Perth International Arts Festival in Australia, and the Hong Kong International Chamber Music Festival.

Alongside their growing European profile, the quartet’s US profile continues to flourish, with recent engagements including the Aspen, Bravo! Vail, and Bowdoin International music festivals; Toronto Summer Music; Chamber Music San Francisco; Music@Menlo; the Ravinia Festival; and Caramoor. The quartet has also held faculty positions at Southern Methodist University in Dallas, Texas, and The University of Akron in Ohio.

In the fall of 2021, the Escher String Quartet released their latest album, which features the complete quartets of Ives and Barber, on the BIS record label. The Strad magazine called it “a fascinating snapshot of American quartets” and “a first-rate release all around.” Between 2015 and 2018, they released recordings of the complete Mendelssohn String Quartets and beloved Romantic quartets by Dvořák, Borodin, and Tchaikovsky, also on BIS, to the highest critical acclaim, with BBC Music Magazine praising the Escher for their “eloquent, full-blooded playing” and “beautiful blend of individuality and accord.” The quartet’s 2019 album Dance, with Grammy Award–winning guitarist Jason Vieaux, was also enthusiastically received, and a two-volume set of the complete Zemlinsky String Quartets, recorded for the Naxos label, earned high accolades as well, including a five-star review in The Guardian, which named it Classical CD of the Year; a recommendation in The Strad; being named Recording of the Month by MusicWeb International; and a BBC Music Magazine Award nomination.

Within months of its inception in 2005, the Escher String Quartet came to the attention of key musical figures worldwide. The Emerson String Quartet championed them, and both Pinchas Zukerman and Itzhak Perlman invited them to be quartet-in-residence at their summer festivals: the Young Artists Program at Canada’s National Arts Centre and The Perlman Music Program on Shelter Island, New York, respectively.
The Escher String Quartet took its name from the Dutch graphic artist M. C. Escher, having been inspired by his method of interplay between individual components that worked together to form a whole.