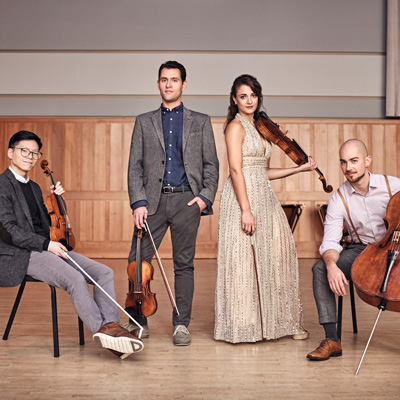 Named one of the greatest string quartets of the last 100 years by BBC Music Magazine, the Grammy-nominated Dover Quartet has followed a “practically meteoric” (Strings magazine) trajectory to become one of the most in-demand chamber ensembles in the world. In addition to their faculty role as the Penelope P. Watkins Ensemble in Residence at the Curtis Institute of Music, the Dover Quartet holds residencies with The Kennedy Center, the Bienen School of Music at Northwestern University, the Amelia Island Chamber Music Festival, and Artosphere. The group’s awards include a stunning sweep of all prizes at the 2013 Banff International String Quartet Competition, grand and first prizes at the Fischoff National Chamber Music Competition, and prizes at the Wigmore Hall International String Quartet Competition. Its prestigious honors include the Avery Fisher Career Grant, Chamber Music America’s Cleveland Quartet Award, and the Hunt Family Award—one of the inaugural Lincoln Center Awards for Emerging Artists.

In October 2021, Cedille Records released the second of three volumes in the quartet’s recording of the complete Beethoven String Quartets. In a review of the first volume, The Strad magazine described the highly acclaimed recording as “meticulously balanced, technically clean-as-a-whistle and intonationally immaculate.” The quartet also released Encores, featuring 10 works by Mendelssohn, Debussy, Dvořák, and others, in 2021 on the Brooklyn Classical label and their Grammy-nominated recording of Schumann’s String Quartets in 2019 on the Azica Records label. Cedille also released the quartet’s Voices of Defiance: 1943, 1944, 1945 in 2017 and an all-Mozart debut recording that features Michael Tree, the late violist of the Guarneri Quartet, in 2016. Voices of Defiance, which explores works written during World War II by Viktor Ullmann, Dmitri Shostakovich, and Simon Laks, was lauded upon its release by The Wall Street Journal as “undoubtedly one of the most compelling discs released this year.”

The Dover Quartet draws from the lineage of the distinguished Guarneri, Cleveland, and Vermeer string quartets. Its members studied at the Curtis Institute of Music and Rice University’s Shepherd School of Music, where they were mentored extensively by Shmuel Ashkenasi, James Dunham, Norman Fischer, Kenneth Goldsmith, Joseph Silverstein, Arnold Steinhardt, Peter Wiley, and Mr. Tree. The Dover Quartet formed at Curtis, and the group’s name pays tribute to Dover Beach, a work for voice and string quartet by Curtis alumnus Samuel Barber.