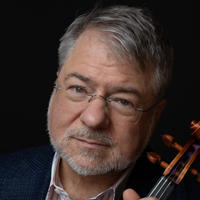 Violinist Daniel Phillips enjoys a versatile career as an established chamber musician, solo artist, and teacher. He serves as co-artistic director of the Music from Angel Fire chamber music festival with his wife, flutist Tara Helen O’Connor, and he’s a founding member of the 35-year-old Orion String Quartet, which regularly performs with The Chamber Music Society of Lincoln Center. The quartet’s discography includes the complete quartets of Beethoven and Kirchner.

Mr. Phillips is a graduate of The Juilliard School and a winner of the 1976 Young Concert Artists competition. His major teachers were his father, Eugene Phillips; Ivan Galamian; Sally Thomas; Nathan Milstein; Sandor Vegh; and George Neikrug.

Throughout his career, Mr. Phillips has performed as a soloist with ensembles such as the Boston, Houston, New Jersey, Phoenix, Pittsburgh, San Antonio, and Yakima symphony orchestras. His festival appearances include Chamber Music Northwest, the Spoleto Festival USA, and the Chesapeake Music Festival. He’s performed at the Santa Fe Chamber Music Festival every season since 1979, and he’s participated in the International Musicians Seminar in Cornwall, England, since its inception. Mr. Phillips’s faculty appointments include Mannes, Juilliard, the Aaron Copland School of Music at Queens College, and the Bard College Conservatory of Music as well as the summer faculties of the Heifetz International Music Institute and the St. Lawrence String Quartet Chamber Music Seminar at Stanford.

Daniel Phillips is a former member of the renowned Bach Aria Group, and he’s toured and recorded in a string quartet for Sony Classical with violinist Gidon Kremer, violist Kim Kashkashian, and cellist Yo-Yo Ma. In 2018, he served as a judge for the Seoul International Violin Competition, and this summer he serves as a judge for the Leipzig International Bach Competition, where he won third prize in 1976. Mr. Phillips lives with his wife and two cute dachshunds on Manhattan’s Upper West Side.