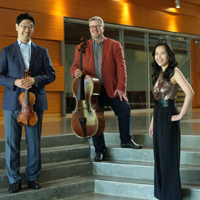 Violinist Soovin Kim won first prize at the Paganini International Violin Competition at age 20. His additional honors include the Avery Fisher Career Grant and the Borletti-Buitoni Trust Award. For 20 years, he was the first violinist of the Johannes Quartet, and since 2014, he’s been on the faculty of the New England Conservatory.

Paul Watkins has been the cellist of the Emerson String Quartet since 2013, and for 16 years he was a member of The Nash Ensemble. He’s the artistic director of the Great Lakes Chamber Music Festival in Michigan and a visiting professor of cello at the Yale School of Music. He won first prize in the 2002 Leeds Conductors Competition, served as music director of the English Chamber Orchestra and principal guest conductor of the Ulster Orchestra, and continues to conduct a wide range of internationally acclaimed ensembles.