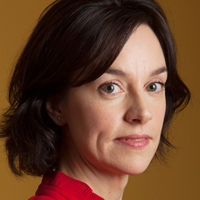 Hailed as “an extraordinary clarinetist” by The New York Times, “elastic, exacting, [and] stupendous” by the Los Angeles Times, and a “clarinet genius” by Time Out New York, Dublin-born clarinetist Carol McGonnell is known for the expressive power of her playing of standard repertoire as well as her fearless exploration of cutting-edge developments in new music.

Ms. McGonnell performed in the inaugural concert held in Carnegie Hall’s Zankel Hall, and she’s appeared on Lincoln Center’s Great Performers series. She’s also performed as a soloist in John Adams’s In Your Ear festival at Carnegie Hall and the Los Angeles–based Monday Evening Concerts series, curated by Esa-Pekka Salonen, as well as with ensembles around the world, such as Ensemble Modern, The Saint Paul Chamber Orchestra and, in New York City, the Zankel Band of Carnegie Hall and The Metropolitan Museum of Art’s Artists in Concert. Her festival appearances include the Santa Fe, Marlboro, Mecklenburg, and West Cork chamber music festivals, among many others. She’s also been heard on broadcasts on RTÉ, RTÉ Lyric FM, the BBC, WQXR and NPR, and she’s awaiting the release of her latest CD, which includes a new concerto by Philippe Hurel.

Carol McGonnell is a founding member of the Argento Chamber Ensemble, and she serves as artistic director of Music for Museums, which works in association with the National Gallery of Ireland and collaborates with museums such as The Metropolitan Museum of Art, the Isabella Stewart Gardner Museum in Boston, and the J. Paul Getty Museum in Los Angeles. She spent two years in residence with Trio Ariadne at the Green Music Center in Sonoma, and she’s been on the chamber music faculties of the American Conservatory of Fontainebleau and the Aaron Copland School of Music at Queens College, City University of New York. She’s also an auxiliary faculty member for contrabass clarinet at The Juilliard School.