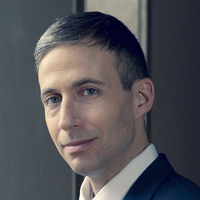 Benjamin Hochman is a musician of exceptional versatility who regularly appears in multiple guises as orchestral soloist, recitalist, and chamber musician. In recent years, he’s ventured into the orchestral repertoire as a conductor. His wide range of partners and projects is matched by his curiosity, focus, and ability to communicate deeply with audiences.

Since his Carnegie Hall debut as a soloist with the Israel Philharmonic, Mr. Hochman has enjoyed an international performing career, appearing as a soloist with the New York, Los Angeles, and Prague philharmonic orchestras and the Chicago, Pittsburgh, San Francisco, and Jerusalem symphony orchestras under conductors including Gianandrea Noseda, Trevor Pinnock, John Storgårds, and Joshua Weilerstein.

In the 2021–22 season, Mr. Hochman returns to Santa Fe Pro Musica to open their season, conducting Beethoven’s Symphony No. 5 and playing Mozart’s Concerto for Two Pianos with Anne-Marie McDermott, and he rejoins the Orlando Philharmonic Orchestra and Music Director Eric Jacobsen to play Brahms’s Piano Concerto No. 1. Chamber music engagements include the Tel Aviv Museum of Art, the Schubert Club in Minnesota, the Santa Fe Chamber Music Festival, the Strings Music Festival in Colorado, Music Mountain in Connecticut, The Stissing Center in New York, and numerous appearances in Berlin. He also records the two Brahms Sonatas for Viola and Piano alongside works by Robert Schumann and Clara Schumann with violist Dov Scheindlin of the Metropolitan Opera Orchestra for the Aparté label in Paris.

Recent highlights for Mr. Hochman include performing four Beethoven Piano Sonatas for Daniel Barenboim at the Pierre Boulez Saal and Canonic Codes, a piano recital juxtaposing musical canons by Bach, George Benjamin, and Christopher Trapani (a premiere) for an online edition of the Charlottesville Chamber Music Festival. The Trapani and Benjamin works are featured alongside Rebecca Saunders’s Shadow in a recital for Tzlil Meudcan, a new-music festival in Tel Aviv.

A graduate of the conducting program at The Juilliard School, where he received the Bruno Walter Scholarship and the Charles Schiff Award, Mr. Hochman trained under Alan Gilbert from 2016 to 2018. Highlights of his conducting engagements include the English Chamber Orchestra, Juilliard Orchestra, Orlando Philharmonic Orchestra, Florida Orchestra, and The Orchestra Now at the Bard Music Festival.

In 2019, Mr. Hochman released an album for Avie Records called Mozart Piano Concertos Nos. 17 and No. 24, on which he also directs the English Chamber Orchestra. His first two recordings for Avie Records were Homage to Schubert (featuring works by Schubert, György Kurtág, and Jörg Widmann) and Variations (featuring works by Knussen, Berio, Lieberson, George Benjamin, and Brahms). Variations was selected by The New York Times as one of the best recordings of 2015.

Benjamin Hochman was born in Jerusalem in 1980. He’s a graduate of the Curtis Institute of Music, where he studied with Claude Frank, and the Mannes School of Music, where he studied with Richard Goode. His studies were supported by the America-Israel Cultural Foundation. He serves on the piano faculty of the Bard College Conservatory of Music and is currently a research associate at Bard College Berlin. Mr. Hochman is a Steinway Artist, and his website is BenjaminHochman.com.