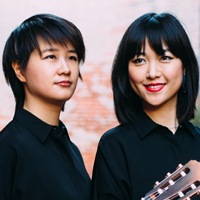 The Beijing Guitar Duo—Meng Su and Yameng Wang—launched their international concert career with their New York debut at Carnegie Hall in 2010. Since then, they’ve been praised by the distinguished Classical Guitar Magazine as “having the star potential to serve as inspiration for new generations of guitarists to come.”

As active performers, the duo has appeared around the world in venues such as the Concertgebouw in Amsterdam, Palau de la Música in Barcelona, Tchaikovsky Concert Hall in Moscow, and National Theatre in Beijing. They regularly collaborate with orchestras and with flutist Marina Piccinini, the Grigoryan Brothers guitar duo, and the legendary guitarist Manuel Barrueco, whom they’ve toured with in Europe, Australia, Asia, and the United States.

The duo has been hailed for giving performances and releasing recordings that reveal an “ability and artistry that exceeds their years.” Their debut CD, Maracaípe, was nominated for a Latin Grammy Award for its title work, which was written for them by renowned guitarist and composer Sérgio Assad. Their second CD, Bach to Tan Dun, has been widely noted for its world-premiere recording of Tan Dun’s Eight Memories in Watercolor, which Mr. Barrueco arranged for the duo. In 2014, they collaborated with Mr. Barrueco to release an album of works for three guitars called China West.

In addition to concertizing, the duo is dedicated to teaching, which brings them to major conservatories worldwide to give master classes and judge competitions. From 2011 to 2015, they served as artists-in-residence for San Francisco Performances, which brought them to the Bay Area two weeks a year for community outreach, performances, and master classes in public schools as well as for clinics at the San Francisco Conservatory of Music.