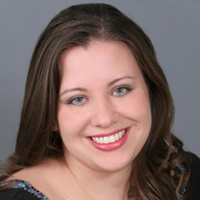 Ashley Vandiver joined the Toronto Symphony Orchestra as fourth-chair viola in 2018, and she’s been a member of the violin section of The Santa Fe Opera Orchestra since 2014. The American-born violinist and violist has performed in more than 30 countries on 5 continents, and The Denver Post has praised her as “wonderfully expressive…polished and carefree.”

Prior to joining the TSO, Ms. Vandiver was a violinist in the National Arts Centre Orchestra in Ottawa. She’s performed regularly with the Saint Paul Chamber, Canadian Opera, and National Ballet of Canada orchestras and the New York City–based orchestra The Knights. Before immigrating to Canada in 2012, she was a founding member and rotating concertmaster of the Grammy-nominated chamber orchestra A Far Cry. Ms. Vandiver has performed at major chamber music and orchestral festivals across North America and Europe, including the Santa Fe Chamber Music Festival, Ravinia, Schleswig-Holstein, Yellow Barn, and Verbier, where she held the position of principal second violin in the festival’s orchestra.

As an educator, Ms. Vandiver has served on the string faculties of the University of Ottawa, Wellesley College, and the Boston Symphony Orchestra’s Project STEP, a comprehensive training program for talented children from underrepresented Boston communities. She’s also been an adjudicator for Carnegie Hall’s National Youth Orchestra of the United States of America.

Ms. Vandiver graduated from the New England Conservatory with distinction in violin performance and went on to earn her master of music degree from the Royal Conservatory in the Netherlands. Her principal teachers include Vera Beths, James Buswell, Kenneth Goldsmith and Laura Bossert.