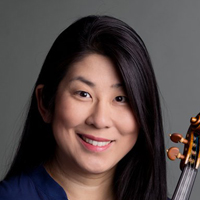 When she was 12 years old, Ms. Oshiro-Morales made her debut with the Chicago Symphony Orchestra. Throughout her career, she’s appeared as a soloist with the St. Louis Symphony Orchestra, Napa Valley Symphony, Minnesota Sinfonia, and other ensembles. She’s also collaborated with such artists as violinists Vadim Repin and Gil Shaham, cellist Alban Gerhardt, and classical guitarist Jason Vieaux.

Ms. Oshiro-Morales began violin studies at the age of three. She went on to study with Almita and Roland Vamos at the Oberlin Conservatory of Music, where she received the Dean’s Talent Award scholarship. She continued her studies at The Juilliard School with Robert Mann, the founder and former first violinist of the Juilliard String Quartet.

In addition to playing music, Ms. Oshiro-Morales enjoys hiking and running and has completed the Chicago Marathon and the New York City Marathon.