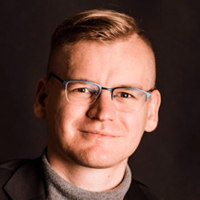 Alexander Vvedenskiy is principal oboe of the Louisville Orchestra. He holds degrees from the Curtis Institute of Music and Manhattan School of Music, where his major teachers were Richard Woodhams and Liang Wang, respectively.

As a soloist and chamber musician, Mr. Vvedenskiy has performed in numerous concert halls and at numerous music festivals in Europe, Asia, and the United States. Highlights of his solo career include performances with the Lithuanian National Symphony Orchestra and The Philadelphia Orchestra. He’s also made multiple appearances as guest principal oboe with the New York Philharmonic, Pittsburgh Symphony Orchestra, and Chicago Symphony Orchestra.